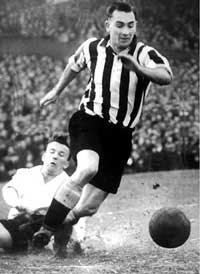 On 15 October 1949, England and Wales met in the first World Cup qualifier for both teams, with England winning 1-4.

The English and Welsh football associations had joined FIFA in 1906, but left in 1929, along with the other British associations, over a dispute about payment of amateur players. The rift prevented all of British teams from participating in the first three World Cups. The British rejoined FIFA in 1946. Rather than have them go through a separate qualification process, FIFA used the pre-existing British Home Championship as a qualification group, with the top two finishers advancing to the World Cup.

The teams met at Ninian Park in Cardiff, with England taking an early lead with a 22nd-minute goal from Blackpool's star forward, Stan Mortensen--the first England goal in a World Cup campaign. His fellow forward, Newcastle's Jackie Milburn (pictured) then added a hat-trick (29', 34', 66') before Wales eventually got on the board with a late consolation goal from right winger Mal Griffiths.

England and Scotland finished first and second in the table to progress to the World Cup, but Scotland withdrew because the head of the Scottish FA, George Graham, felt they should participate only if they won the BHC. England participated and were famously defeated by the United States.
Posted by Brian Seal at 12:01 AM