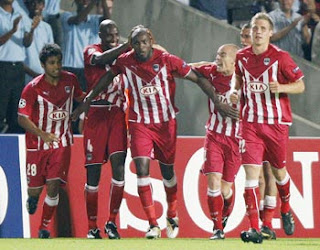 On 21 October 2009, Bordeaux beat Bayern Munich 2-1 in the group stage of the Champions League. They were one of only two teams to defeat the German side in the campaign.

The teams met at Bordeaux's Stade Chaban-Delmas on the third match day of the group stage. They had identical records, both of them having drawn with Juventus and beaten Maccabi Haifa. Battling for the group's top spot, Bayern received an early gift in the form of a 6th-minute own goal from Bordeaux center back Michaël Ciani, who inadvertently turned a Bayern corner into his own net.

Bordeaux put the Germans under constant pressure, however, and Ciani redeemed himself in the 27th minute when he powered another corner into the correct goal. Three minutes later, Bayern midfielder Thomas Müller received a second yellow card for a strong tackle on Bordeaux right back Matthieu Chalmé, reducing the Germans to 10 men. With Bayern reeling, the hosts took advantage with a 40th-minute goal from defender Marc Planus, whose extended leg beat Bayern defender Hamit Altintop to the ball and poked it into the top corner.

The second half proved just as exciting, with Bayern keeper Hans-Jörg Butt saving two penalties to spare the Germans an even greater margin of defeat. The second of those came after center back Daniel Van Buyten received a straight red for fouling Bordeaux striker Marouane Chamakh.

Bordeaux proceeded to beat Bayern again in the return match on 2 November, but it was Bayern's last defeat in the competition until the Final, when they fell to Inter, 0-2.