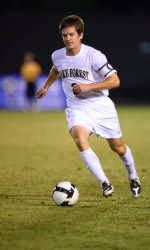 On 7 November 2008, top-ranked Wake Forest University beat the University of Virginia 2-0 before a crowd of 3,968 at Virginia's Klockner Stadium. The win secured the Demon Deacons' first undefeated regular season in program history.

The star of the match was Deacon midfielder Sam Cronin (pictured), whose 6th minute cross was headed in by forward Cody Arnoux to give Wake Forest an early 1-0 lead. Cronin doubled the lead in the 16th minute when he collected a loose ball and fired off an 18-yard strike into the back of the net.
Cronin graduated from Wake Forest in 2009 and currently plays for Toronto FC.
Coincidentally, Wake's win came 139 years to the day after the first intercollegiate football game played in the US. In that match, played on 7 November 1869 using rules drafted by the London Football Association, Rutgers University defeated Princeton University, 6-4. Because the London Rules at the time allowed players to use their hands to bat or hold the ball, that match is also generally considered to be the first-ever "American football" game.
Posted by Brian Seal at 12:01 AM