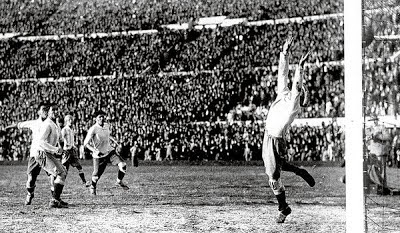 On 29 November 1904, former Uruguayan international forward and manager Héctor Castro was born in Montevideo.
Nicknamed El Manco ("The Maimed") because he accidentally amputated his right forearm with an electric saw at the age of 13, Castro began his professional career in 1923 with Montevideo's Club Nacional, with whom he won the 1924 Uruguayan championship. In 1926, he started a successful run with the Uruguayan national team, winning the 1926 version of the international tournament that would later be known as the Copa América and the 1928 Olympics

He also earned honors in the 1930 World Cup, memorably scoring the last goal in Uruguay's 4-2 win over Argentina in the Final (pictured above).
He left Nacional in 1932 for Argentinian club Estudiantes, but returned to Nacional 1933 and won another national title before retiring as a player in 1936. In 1939, Castro returned to Nacional as manager, winning four consecutive Uruguayan championships (1940-43) before retiring in 1943. He returned for another season in 1952 and led the club to yet another Uruguayan title.
Castro passed away in Montevideo on 15 September 1960 at the age of 55.
Posted by Brian Seal at 12:01 AM