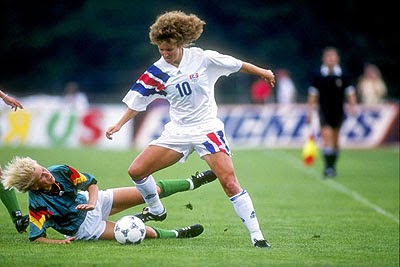 On 30 November 1991, the United States women's national team beat Norway 2-1 in the inaugural FIFA Women's World Cup Final before a crowd of 63,000 at Tianhe Stadium in Guangzhou, China.

The United States entered the Final after winning all of their previous matches in the tournament, including a 5-0 hammering of Brazil in the group stage, a 7-0 demolition of Chinese Taipei in the quarterfinals, and a 5-2 victory over Germany in the semifinals. Norway, meanwhile, had opened the tournament with a 4-0 defeat to hosts China, but then put together a string of wins to reach the Final, including a convincing 4-1 victory over Sweden in the semifinals.


US midfielder/forward Michelle Akers (pictured) entered the Final as the Cup's leading scorer with 8 (5 of which came in the win over Chinese Taipei). True to form, she gave the Americans the lead with a goal in the 20th minute, but Norway struck back with a 29th-minute equalizer from forward Linda Medalen. The match remained even until the 78th minute, when Akers pounced on a stray back pass from Norway's Tina Svensson and sidestepped keeper Reidun Seth to tap the ball into the open net. The goal gave the United States the win and upped Akers' tally to 10, making her the tournament's top scorer.


Norway got their revenge in 1995, when they eliminated the United States in the quarterfinals, 1-0, then beat Germany in the Final.
Posted by Brian Seal at 12:01 AM