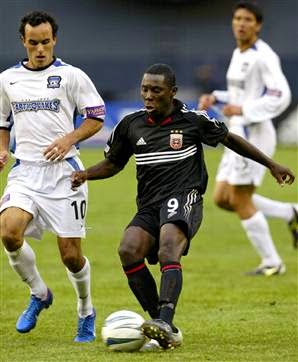 Born in Ghana in 1989, Adu emigrated to the United States in 1997, becoming a US citizen in 2003. While growing up in Maryland, he quickly displayed a talent for the game. As a 10-year old, he played with the US U-14 squad and began to draw attention from noted clubs including Inter Milan and Manchester United. In January 2002, he joined the US Soccer Federation's U-17 residential program at the IMG Soccer Academy in Bradenton, Florida.
Despite the interest from Europe, Adu and his family decided he should stay close to home with MLS and DC United. He made his first appearance for DC as a second-half substitute in their season opener on 3 April 2004. He played in all 30 regular season matches, finishing with five goals and three assists, and also helped DC to the 2004 MLS Cup.
Though moderately successful, Adu's time in DC was marred by complaints over playing time and positioning and, in December 2006, he moved to Real Salt Lake. He has since changed clubs a number of times, including a stint at Benfica and loan spells with Monaco and Belenenses.
Before signing Adu, DC United had previously signed the league's youngest players in Bobby Convey (2000) and Santino Quaranta (2001), both of whom were 16 at the time they signed.