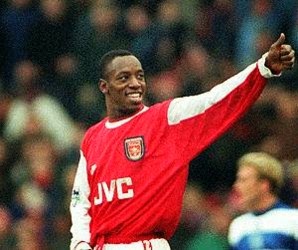 A late arrival to professional football, the striker was discovered at the age of 21 by Crystal Palace scout Pete Prentice in 1985 while playing in a local Sunday league. Wright signed a contract with Palace in August of that year. They were in Division Two at the time.
He scored 9 goals in his first season at Selhurst Park, and helped lead the London club to promotion in 1989. Injuries limited his playing time in the 1989-90 season, but Palace advanced to the 1990 FA Cup Final against Manchester United. Wright made an unforgettable appearance as a late substitute, coming on in the 69th minute and scoring three minutes later to level the match at 2-2. He scored again in extra time to put Palace ahead, but United equalized to force a replay, which the Manchester club won, 1-0. Wright played six seasons for Palace, making 277 appearances and scoring 177 goals, making him the club's third-highest goalscorer.

In September 1991, he moved across London to Arsenal for a then club-record transfer fee of £2.5 million. He got off to a blistering start in his first season with the Gunners, taking honors as the League's top scorer with 29 goals (five of which he had scored for Palace before the transfer). He was the club's top scorer for six consecutive seasons and won several trophies, including the League title (1998), the FA Cup (1993, 1998), the League Cup (1993) and the Cup Winners' Cup (1994). In all, he scored 185 goals for Arsenal in 288 appearances. He was the club's highest scorer until the record was broken by Thierry Henry in October 2005.
He left Arsenal in 1998 and spent time with West Ham, Nottingham Forest, Celtic, and Burnley before retiring in 2000.