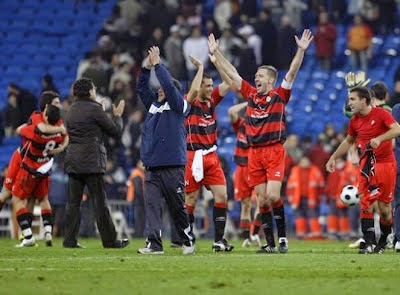 On 11 November 2008, Spanish third division side Real Unión Club de Irún lost away to Real Madrid, 3-4, in the Round of 32 of the Copa del Rey. Thanks to their 3-2 win in the first leg, however, Irún advanced on an aggregate 6-6 score with a 3-2 advantage in away goals.Irún had already been tested in the cup with early-round wins over CD Lugo (0-3), UE Sant Andreu (2-1), and Barakaldo CF (2-1). Real Madrid, on the other hand, was playing their first match of the tournament, entering the competition in the Fourth Round.The match was even at 2-2 in the second half, when Real Madrid substitute Alberto Bueno put his team ahead with a goal in the 69th minute. Real Madrid captain Raúl appeared to secure the Blancos' advancement with an 85th-minute strike--his third of the match--but a defensive miscue gave Irún another chance and midfielder Arangoa Eneko Romo scored the decisive goal in the 90th minute.