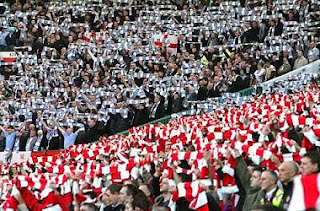 On 12 November 1881, Newton Heath FC defeated hosts West Gorton (St. Mark's) FC, 3-0, in a friendly. It was the first Manchester derby, as the Heathens later became known as Manchester United and the Saints later changed their name to Manchester City. The Ashton Reporter covered the match, calling it "a pleasant game."With that first match, played at the invitation of West Gorton, there have been a total of 168 contests between the two teams. United currently have the advantage with 69 wins to City's 49 (there have been 50 draws). The derby's top scorers is United's Wayne Rooney with 11, while City's Joe Hayes and Francis Lee are tied for second at 10 goals each. A number of players have taken the pitch for both City and United, including Denis Law, Peter Schmeichel, and, most recently, Carlos Tevez.

City are currently on a four-match derby win streak, with United's last derby victory coming on 9 December 2012.
Posted by Brian Seal at 12:01 AM