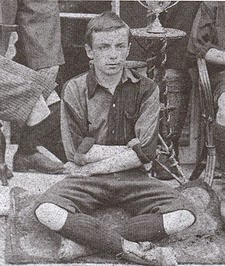 On 24 November 1874, Charles William Miller, the man who introduced football to Brazil, was born in São Paulo, Brazil to a Scottish father and a Brazilian mother.

In 1884, like many children in Brazil's British community, Miller was sent by his parents to England for his education. He enrolled in a public school on the outskirts of Southampton, England, where he was introduced to football. While overseas, he played for Corinthian FC in London and St. Mary's, the forerunner of Southampton FC.
He returned to Brazil in 1894 with a football and a set of rules and set about organizing matches among the British expatriates. He was one of the founding members of São Paulo AC and also helped organize Brazil's first football league. With Miller at striker, São Paulo won the first three league championships (1902, 1903, 1904).

A few short years after Miller's return from England, football had become Brazil's most popular sport.
Posted by Brian Seal at 12:01 AM