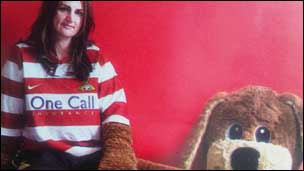 On 9 June 2011, Doncaster reinstated their "Donny the Dog" mascot after firing her one day previously for participating in a lingerie photo shoot.

Tracy Chandler, an unpaid volunteer, had worn the mascot suit for Doncaster for over three years before agreeing to the shoot in exchange for a donation to a children's charity. The photos, which appeared in Sunday Sport, showed Ms. Chandler in lingerie alongside the dog costume. She described the pictures as "tongue-in-cheek and not seedy."

She had not gotten permission from the club and, when they learned about the photos, they sacked her by email on 8 June. But after word of the firing got out, Doncaster quickly reinstated her, with club chairman John Ryan saying "we were just a bit concerned about the sexualisation of young children, it's a tricky area these days, we're putting it right, maybe it was a mistake."

Ms. Chandler was happy to reclaim the suit, calling the club's reversal "better than winning the lottery."
Posted by Brian Seal at 12:01 AM