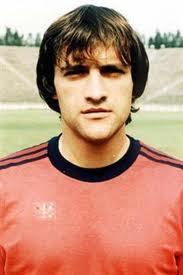 On 26 June 1988, the Romanian Cup Final ended abruptly when one of the teams stormed off the field and refused to return.

The Final was an Eternal Derby contest between Bucharest rivals Steaua and Dinamo. Steaua were in the midst of a 60-match unbeaten run that stretched back to the start of the 1986-87 season and included the 1987 and 1988 league titles and the 1987 Romanian Cup (they had also recently won the 1986 European Cup Final over Barcelona).

The game was a rematch of the previous final. With only a few minutes left, and the score level at 1-1, Steaua striker Gavril Balint (pictured) put the ball in the back of the Dinamo net for a certain match-winner, but he was flagged for being offside. Upset with the call, the Steaua players and staff marched off the pitch, reportedly at the direction of the club's highest-profile supporter, Valentin Ceaușescu, son of Romanian dictator Nicolae Ceaușescu.

The referee abandoned the match and gave the trophy to Dinamo. But the next day, the government intervened, ruling that the goal should have been allowed and declaring Steaua the winners.

Two years later, after the fall of the Ceaușescu regime, Steaua renounced the cup and offered it to Dinamo, who refused to accept it. That year's cup title remains vacant.

Steaua, meanwhile, continued their unbeaten run, extending it to a total of 119 league and cup matches.
Posted by Brian Seal at 12:01 AM