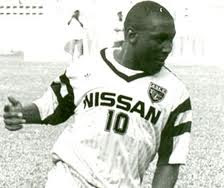 Founded in 1948, Mimosas are the most successful club in Côte d'Ivoire football history, with 24 Premier Division titles. Five of those came during their record unbeaten run, which started on the first day of the 1990 season. They finished that year with their eighth overall title, then continued their run through the entire 1991, 1992, and 1993 seasons, led in part by forward Abdoulaye "Ben Badi" Traoré (pictured), who was the league's top scorer in 1992 (then again in 1994 and 1996).

They nearly extended it through the 1994 season, with eleven wins and a draw in their first twelve matches. But in their thirteenth match, they were upset 2-1 by SO Armée. Mimosas still went on to win the title--they won their next match by the league-record margin of 11-0--but their unbeaten streak stopped at 108, four games past the previous world record of 104, set by Steaua Bucureşti from 1986 to 1989.

Afterward, Mimosas continued their run of success, winning another twelve titles between 1995 and 2010, including seven straight from 2000 to 2006.