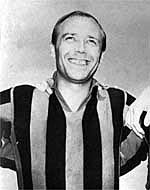 On 3 June 1956, Genoa spoiled Fiorentina's bid for an undefeated season, beating them 3-1 on the last day.

Fiorentina had already clinched the Serie A title, starting the day twelve points clear of second-place Milan with a record of twenty wins and thirteen draws, but were hoping to finish the season without a loss. Their chances looked promising, as their last match was at Genoa, whom they had beaten 3-1 earlier in the season.

But Genoa were eager to play the part of spoiler. They had won the league with an undefeated season of their own in 1923 and wanted to prevent Fiorentina from matching that accomplishment. Their hopes took a quick downward turn when Fiorentina midfielder Guido Gratton scored the opening goal in the 24th minute. Content to play for the draw, the visitors then pulled back into a defensive position.

Genoa continued to press forward in the second half, however, and were rewarded with a penalty kick in the 74th minute. Forward Gunnar Gren (pictured), who played for Fiorentina from 1953 to 1955, converted the kick to equalize against his old team. Fiorentina continued to play defensively, but surrendered another goal in the 85th minute, then one more for good measure in the 90th minute to end the day as a 3-1 win for Genoa.