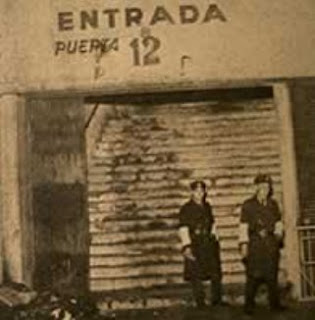 On 23 June 1968, 74 people died and over 150 were injured trying to exit the stadium after a match between River Plate and Boca Juniors. It remains the largest football-related disaster in Argentina's history.

The derby rivals played to a scoreless draw at River Plate's Monumental Stadium. Afterward, several supporters attempted to leave the stadium via Gate 23 (pictured), at the bottom of a dark stairway, but found the door blocked.

Unfortunately, the people at the top of the stairs did not realize that the exit was barred and continued to force their way toward the door. In the ensuing crush, over 150 people sustained injuries and 75 died. Most of them were young, with an average age of 19.


Recriminations and accusations followed immediately afterward, with some people blaming the Boca supporters, some blaming the River supporters, and others blaming the police. An official investigation failed to identify a responsible party, however.
Posted by Brian Seal at 12:01 AM