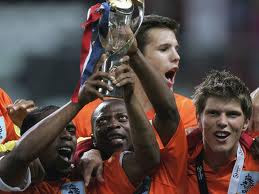 On 4 June 2006, the Netherlands won the U-21 European Championship over Ukraine with a stellar performance from striker Klaas-Jan Huntelaar.

Coming off a season in which he had scored 44 goals in 47 appearances for Herenveen and Ajax, Huntelaar had been named to the preliminary Netherlands senior squad for the 2006 World Cup. But did not make the cut for the final squad and dropped down to play for the U-21s in the European Championship in Portugal.

There, the Netherlands fell to Ukraine in their opening match, but rallied and advanced to the final where they again faced Ukraine. Playing at Porto's Estádio do Bessa, Huntelaar stole the show, putting his team up 2-0 in the first half. The first goal came in just the 11th minute as the striker got onto the end of a long pass from  Nicky Hofs, controlled it, then fired a low ball past Ukraine keeper Andriy Pyatov. The second came from the penalty spot in the 43rd minute.

Ukraine's attempt at a comeback suffered a blow in the 77th minute, as defender Oleksandr Romanchuck received a second yellow card and took the team down to ten men. Hofs then added a third goal for the Netherlands right before the final whistle to cement the 3-0 victory.

Huntelaar moved to the senior side shortly afterward and was the leading scorer in Euro 2012 qualification with twelve goals.
Posted by Brian Seal at 12:01 AM