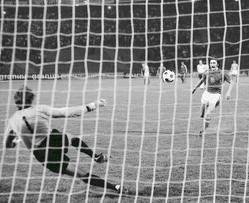 On 20 June 1976, Czechoslovakia won the first major international tournament to be decided by a penalty shootout, beating West Germany in the European Championship Final.

The Final was played before a crowd of 30,790 at the Crvena Zvezda Stadium in Belgrade. There, Czechoslovakia jumped to a 2-0 lead with strikes from Ján Švehlík (8') and Karol Dobiaš (25'), but West Germany halved the margin three minutes later with a goal from Dieter Müller--it was his fourth goal of the tournament, making him the top scorer. The Germans then found a late equalizer through forward Bernd Hölzenbein (89') to send the match into extra time.

Unlike their previous matches, however, neither team could generate an extra-time goal and the contest went to penalties. Both sides converted their first three kicks and the Czechs made their fourth, but on West Germany's fourth attempt, midfielder Uli Hoeness sent the ball over the bar to give Czechoslovakia a 4-3 edge.

Czech midfielder Antonín Panenka (pictured, right) then stepped up to the spot. As keeper Sepp Maier dove to his left, Panenka chipped the ball right down the middle to secure the title. It was their first and only major trophy, though they went on to win gold at the Olympics in 1980.