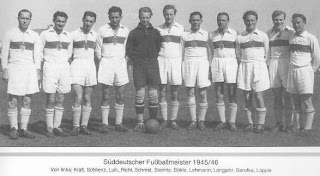 On  4 November 1945, after a short break, league football returned to Germany. Part of Germany, anyway.

While some countries suspended their football leagues for the duration of World War II, the sport continued to be played in Germany, with the last recorded match under the Third Reich being a 3-2 Bayern Munich win over 1860 Munich in April 1945. When the German government surrendered three weeks later, the Allied powers occupied Germany and banned all organizations, including sports clubs.

But in September 1945, the Americans, in charge of southeastern Germany including the states of Bavaria and Hesse, allowed matches in their zone and then, at the end of October, sanctioned the formation of a new  league. Called the Oberliga Süd, it consisted of 16 teams, with league play starting on 4 November. Each team played thirty games, with Stuttgart (pictured) winning the inaugural title.

The Oberliga system lasted until 1963, when it was replaced by the nationwide Bundesliga.