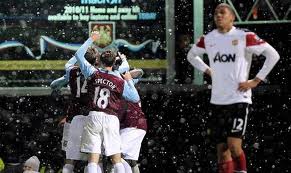 On 30 November 2010, league-leaders Manchester United were dumped out of the League Cup by last-place West Ham, 4-0.

The Red Devils were the cup holders, having won the competition in 2009 and 2010. In fact, they had not lost a League Cup match since September 2007. In 2010, they beat Scunthorpe and Wolverhampton to set up a fifth-round meeting with West Ham, whom they had already beaten in the league back in August en route to their climb to the top of the table.

West Ham, meanwhile, had advanced in the tournament over fellow Premier League teams Sunderland and Stoke City while sinking to the bottom of the league table--they had been in last place since the start of October.

But when they met at Upton Park on 30 November, West Ham were the dominant side, taking a 2-0 lead into the break after a pair of goals from Jonathan Spector (22', 37'). They continued to shine in the second half as Carlton Cole got a brace of his own (56', 66') to stretch the final margin to 4-0.

The win put the Hammers into the semifinals, where they fell to eventual winners Birmingham City. In the league, both Manchester United and West Ham finished in the same respective spots, with the former winning the league and the latter sitting on the bottom.