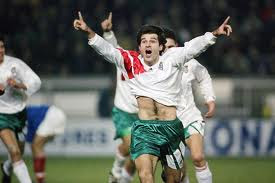 On 17 November 1993, a very late goal helped Bulgaria upset France in a World Cup qualifier in Paris to earn their place in the tournament and eliminate the hosts.

It was the last match of their qualification group. Sweden had already secured the top spot, leaving only one more ticket to the World Cup up for grabs. France started the day in second, one point ahead of third-place Bulgaria, and needed only a draw to advance.

Even though Bulgaria won the first meeting in Sofia, 2-0, Les Bleus looked like the more likely team to get the needed result, especially once they took a 1-0 lead with a 31st-minute goal from Eric Cantona. The visitors quickly answered with a strike from Emil Kostadinov (pictured) six minutes later, but the match remained level at 1-1 until deep in the second half.

Then, in the last few seconds of the 90th minute, Kostadinov struck again, blasting the ball into the roof of the net from close range. The final score of 1-2 switched the two teams in the table, putting Bulgaria in the World Cup and leaving France out.

The Bulgarians went on to make their best-ever World Cup showing, reaching the semifinals before falling to Italy, then finishing fourth after a loss to Sweden in the third-place match.