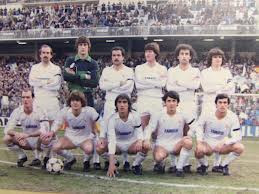 On 13 November 1982, Real Madrid won the first Supercopa de España match, beating Real Sociedad 1-0. Unfortunately for them, it was only the first of two legs.

The winners of the league and Copa del Rey had met in previous competitions over the years, most notably the Copa Eva Duarte, which had been played from 1947 to 1953. But that was the last time until the establishment of the Supercopa in 1982.

Real Madrid, the previous season's Copa del Rey winners, hosted the first match against Sociedad, the reigning league champions. With a crowd of 45,000 looking on, Madrid defender John Metgod (pictured at bottom left) scored the match's only goal in the 44th minute to give the hosts the win.

The teams didn't meet for the second leg until 28 December, when Sociedad got three extra-time goals to win the match 4-0, taking the cup 4-1 on aggregate.
Posted by Brian Seal at 12:01 AM