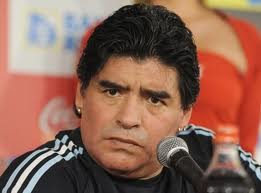 On 15 November 2009, FIFA issued a two-month ban to Diego Maradona and fined him £15,000 as the result of a press conference he gave the previous month.

After taking over as manager of the Argentinian national team in 2008, the former star midfielder guided them through a difficult qualification campaign for the 2010 World Cup that included a 6-1 defeat to Bolivia as well as losses to Ecuador, Brazil, and Paraguay. With two matches remaining, Argentina were in fifth place and in danger of missing the World Cup.

But they won those last two matches, over Peru and Uruguay, to claim the last guaranteed CONCACAF spot. After the second one, Maradona held a live televised press conference in which he railed against the Argentinian press for the criticism they had delivered during the campaign. The most memorable part of his rant was when he said the journalists "can suck it and keep on sucking it," which prompted FIFA's action.

The ban expired on 15 January 2010. Maradona led Argentina to the World Cup quarterfinals, then fell out with the Argentina Football Federation, who decided later that summer not to renew his contract.