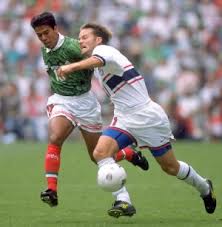 On 2 November 1997, the United States earned their first point in Mexico, playing El Tri to a scoreless draw in a World Cup qualifier.

The US-Mexico rivalry dates back to 1934, when the teams met in Rome for a World Cup qualifier, with the US wining 4-2. But Mexico won the next match, a 7-2 win in Mexico City in 1937, then continued to dominate the US over the next several years, not losing to them again until 1980.

By the time they met for that 1997 qualifier, played before a crowd of 115,000 at the Estadio Azteca, the US had turned things around, winning four and drawing three of the last ten. But they had lost nineteen straight in Mexico, dating back to that first loss in 1937.  Nevertheless, they managed to hold the Mexican team scoreless to walk out with a 0-0 draw.

Points in Mexico continue to be elusive for the US, with their next ones not coming until their most recent match there, a 1-0 win in August 2012.