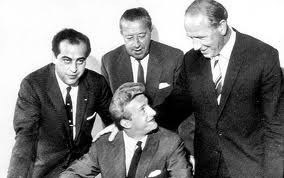 On 29 December 1980, Luigi "Gigi" Peronace, the first football agent in England, died of a heart attack in Montevideo. He was 55 years old.

The Calabria-born Peronace (pictured at far left) held a variety of roles in football, including serving as a translator for Juventus managers William Chalmers and Jesse Carver. He also served as Carver's business manager at Tornio, but left there in 1954 to become the transfer manager at Lazio.

He moved into agency in 1957, when he was contacted by then-Leyton Orient manager Alex Stock, who was interested in taking charge of an Italian club. Peronace helped negotiate a deal with Roma and Stock became their manager later that year. That same year, he was involved in bringing Leeds United forward John Charles to Juventus for a British-record fee of £65,000 (almost double the previous record).

Peronace helped shatter that record when he negotiated the sale of Denis Law from Manchester City to Torino for £100,000. He then beat it again when he helped Law move back to Manchester (this time for Manchester United) for £115,000. Meanwhile, he was also involved in Jimmy Greaves' switch from Chelsea to AC Milan and Joe Baker's move from Hibernian to Torino, then later helped Liam Brady join Juventus from Arsenal.

He wasn't only an agent--in addition to serving as general manager for the Italian national team for the 1978 World Cup and the 1980 European Championship, he helped organize the Anglo-Italian Cup in 1970 (it was later named the Gigi Peronace Memorial).
Posted by Brian Seal at 8:59 AM