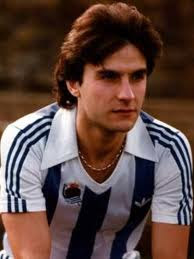 The Supercopa, which features the previous season's league and Copa del Rey winners, was yet another battleground for the burgeoning rivalry between the two clubs. In 1980, Sociedad finished as league runners-up to Madrid by a single point, then won the title the following year by beating Madrid on goal differential. Meanwhile, Madrid won that season's Copa del Rey after eliminating Sociedad on penalties in the semifinals.

The two met at the Bernabéu on 13 November 1982 for the very first Supercopa match, where a 44th-minute goal from Madrid's Dutch defender John Metgod allowed the hosts to escape with a narrow 1-0 edge. In the return leg, played before a crowd of 30,000 at the Estadio Atocha in San Sebastián, Madrid held onto their lead through the first half. But shortly after the restart, Sociedad forward Pedro Uralde (pictured) scored to level the aggregate at 1-1 (53').

The teams remained deadlocked through regulation, sending the match into extra time. There, in just the 92nd minute, Sociedad forward Roberto López Ufarte put his team ahead 1-2 on aggregate. As Madrid pressed forward to find a goal, they exposed their defense and Uralde netted his second of the day (102') to stretch the aggregate lead to 1-3.

Madrid found the net one minute later, but, unfortunately for them, it was their own, as late substitute back José Salguero put the ball past his own keeper. The contest ended 0-4 (1-4 agg.) to deliver the trophy to Sociedad.
Posted by Brian Seal at 12:00 AM