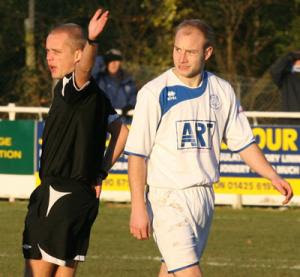 On 27 December 2008, Chippenham Town striker David Pratt set a new world record. But it wasn't one he wanted to set.

Visiting Bashley for a Southern Premier League meeting, Chippenham's starting line-up included the 21-year old Pratt, but only for three seconds. Immediately after the opening whistle, he committed a lunging tackle on Bashley forward Chris Knowles, drawing a straight red card from referee Justin Amey. Bashley manager Steve Riley praised the ref's decision, saying "The lad's gone in with his studs showing and went straight through my player. It was a potential leg-breaker. The ref had no choice." Fortunately, Knowles was uninjured and, unlike Pratt, remained on the pitch.

Despite going down to 10 men so quickly, Chippenham took the lead in the 10th minute, but Bashley scored two late goals to earn a 2-1 victory.

Pratt's red card is the quickest ever issued to a starting player, beating the previous world record of 10 seconds set by Bologna's Guiseppe Lorenzo in 1990. The previous English record was 13 seconds, set by Sheffield Wednesday goalkeeper Kevin Pressman in 2000 for handling the ball outside the box. There have been a few substitutes sent off after no time, however, as they received their ejections prior to coming onto the pitch.

For his part, Pratt later said "The world record is not a big deal to me. It's not something that I'm proud of." In May 2009, he moved to his current club, Basingstoke Town, where his play in 2009-10 won him both the Manager's Player of the Year and the Supporters' Player of the Season awards.
Posted by Brian Seal at 12:00 AM