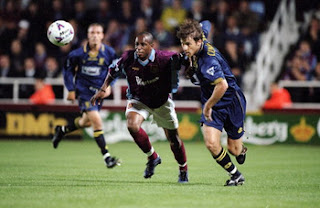 On 9 September 1998, Wimbledon rallied from a 3-0 deficit to beat West Ham 3-4 in one of the Premier League's biggest comebacks.

It was the fourth game of the season for both teams, who were undefeated. The hosts, West Ham, had beaten Wimbledon twice the previous season, including a 3-1 victory at Upton Park, and few thought the day's result would be much different.

The Hammers reinforced those thoughts by going up 3-0 midway through the first half, with goals from former Arsenal teammates John Hartson (7') and Ian Wright (14', 27'). Wimbledon's Marcus Gayle pulled one back in the 30th minute to go into the break down by the familiar score of 3-1.

But the second half was all Wimbledon's. In the 64th minute, a defensive miscue from West Ham center back Javier Margas allowed Jason Euell to close the gap to 3-2. Then Gayle struck again in the 77th minute and Wimbledon were back on level terms. That alone was reason for the visitors to celebrate, but four minutes later Wimbledon substitute Efan Ekoku took a pass from Euell and scored the winner.

Unfortunately for Wimbledon, the game was one of the few highlights in a long and difficult season that saw them slump from fourth place after beating West Ham to sixteenth in the final table. West Ham, meanwhile, rallied to a fifth-place finish.
Posted by Brian Seal at 12:01 AM