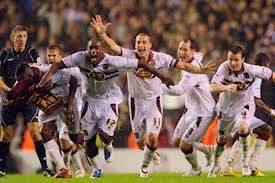 Liverpool had already gotten off to a rough start in their first season under manager Roy Hodgson, winning one and losing two of their first five league games to drop down to sixteenth in the table. They expected a bit of relief in the League Cup against Northampton, who were sitting seventeenth in the League Two table, three divisions down, putting them 69 places below Liverpool.

But while Liverpool were entering the League Cup for the first time that season, going directly into the third round, Northampton had already played and beaten two higher-division clubs, advancing over League One's Brighton in the first round, then beating Championship side Reading on penalties in the second round.

The teams met at Anfield, where Liverpool had lost only once previously to a lower-division team in the League Cup (a 2001 loss to Grimsby Town). That record looked likely to hold when Liverpool went ahead after only eight minutes with a goal from Milan Jovanovic. But Billy McKay equalized for the visitors in the 56th minute and they stayed level until the end of regulation to force extra time.

There, Northampton took the lead with a goal from Michael Jacobs (98'), before David N'gog headed home in the 116th minute to bring the teams level again and send them into a penalty shootout. But after N'gog and Nathan Eccleston missed for Liverpool, Town's Abdul Osman converted his kick to win the day, 2-2 (2-4).

Unfortunately for Northampton, their giant-killing days were numbered and they fell to Ipswich Town in the fourth round.