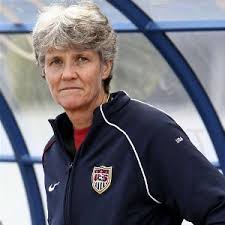 On 19 September 2012, Pia Sundhage closed out her time in charge of the US women's team with a 6-2 win over Australia.

The United States picked the former Swedish national team star in November 2007 to take over from embattled manager Greg Ryan. At the time, she was an assistant with China, her only international managerial role, but she had previous experience at the club level, including spells with Kolbotn, KIF Örebo, and the Boston Breakers.

In her five years at the helm, the United States won Olympic gold in 2008, were runners-up in the 2011 World Cup (losing to Japan on penalties), then repeated as Olympic champions in 2012. Shortly afterward, she announced that she was stepping down to return to Sweden.

Her last match was a friendly against Australia, part of the team's post-Olympic Fan Tribute Tour. A sold-out crowd of 18,598 gathered in Commerce City, Colorado and watched as the teams played to a 2-2 draw at the break. But the US got four second-half goals from Abby Wambach, Alex Morgan, Shannon Boxx, and Sydney Leroux to claim the 6-2 victory.

The match left Sundhage with an overall US record of 91 wins, 10 draws, and only six losses. She currently manages the Swedish national team.