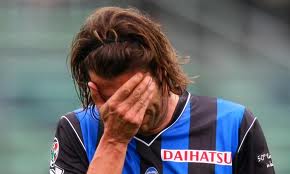 The Italian Football Federation announced the penalty after a lengthy investigation into alleged fixes in eighteen matches, mostly in Italy's lower leagues. A total of nineteen people and fifteen different clubs were implicated, including the 38-year old Doni, who had made 151 league appearances for Atalanta over the previous five years and had just helped them win promotion to the top flight for the 2011-12 season (it was his second stint with the club after making 145 league appearances between 1998 and 2003) .

Investigators determined that several of the suspects had ties to a global gambling syndicate. The individual punishments ranged from five-year bans for eight players to one player who was given a warning only. Doni and ex-Fiorentina striker Mauro Bressan received the second-highest bans of three and a half years each. Bressan had retired in 2009, while the ban ended Doni's career.

Atalanta received a six-point penalty to start the season, but still managed to finish comfortably in twelfth place.
Posted by Brian Seal at 12:01 AM