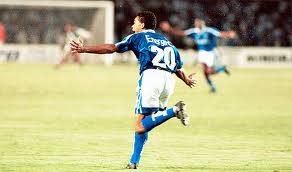 On 13 August 1997, Cruzeiro won their second Copa Libertadores, despite starting the tournament in unimpressive fashion.

Winners of the competition in 1976, Cruzeiro opened the 1997 edition with three straight losses in the group stage, including a 1-0 loss to Sporting Cristal on 28 February. They rallied to win their remaining three group-stage matches, however, with a 2-1 win over Sporting on 11 April to pip the Peruvian club to the group's second place (though Sporting still advanced by finishing third).

The two teams met at the Estadio Nacional in Lima for the final's first leg on 6 August and played to a scoreless draw. Cruzeiro hosted the second leg one week later in Belo Horizonte where the crowd reached an official count of just over 95,000 (and an unofficial count of almost 107,000).

The second leg remained scoreless deep into the second half, when, in the 75th minute, midfielder Elivélton scored the final's only goal. Cruzeiro had taken a corner kick which a Sporting defender headed away. It landed just outside the 18-yard box at the feet of Elivélton, who blasted it into the far bottom corner. The Sporting keeper managed to get a hand to it, but could not keep the ball out of the net.

It was just Elivélton's second goal of the tournament, but was enough to deliver the cup to Cruzeiro.