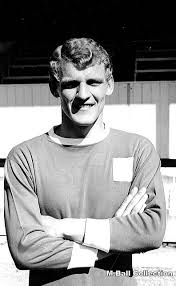 On 20 August 1960, John Trollope made the first of his league-record 770 appearances for Swindon Town in a 1-1 draw with Halifax Town.

Born in Wroughton, just over three miles away from Swindon's County Ground, Trollope spent his entire career with the club. A left back, he made his debut at the age of seventeen in their Division Three opener against Halifax and went on to appear in all but two of their league matches that season.

He continued to feature for them over the next twenty years, as they fluctuated between Divisions Two and Three. Between 1960 and 1978, he never made fewer than 35 league appearances and usually made more than 40 each season.

By the time he retired in 1981, his tally reached a total of 770, setting the current league record for the most appearances at a single club. After hanging up his boots, however, he didn't go far, taking over as the club's manager from 1981 to 1983.
Posted by Brian Seal at 12:01 AM