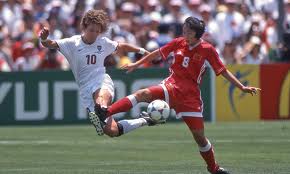 On 24 August 2000, US midfielder/forward Michelle Akers, one of the earliest stars of women's football, announced her retirement.

She joined the US national team upon its formation in 1985 at the age of 19 and scored the team's very first goal in a 2-2 draw with Denmark that August. In 1991, her ten goals at the inaugural women's World Cup remain a tournament record and helped the US lift the trophy. After a disappointing third-place finish in the 1995 World Cup, she helped the team win the gold medal at the 1996 Summer Olympics, then claimed another World Cup trophy in 1999.

The US Soccer Federation has called Akers "the greatest women's soccer player in history." Her status was recognized commercially when she became the first female footballer to earn an endorsement from a shoe company.

Throughout her career, however, she battled injuries, including multiple knee surgeries, a shoulder injury, and a condition known as chronic fatigue syndrome. After the 1999 World Cup, at the age of 34, she decided that she could no longer continue and chose to retire from the game. At the time, she was the team's second-leading scorer, with 105 goals in 153 appearances (she is currently fourth behind Abby Wambach, Mia Hamm, and Kristine Lilly), and remains in the top ten for assists.