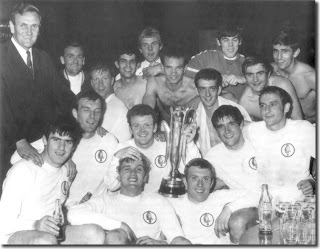 Leeds reached the semifinals in 1966 before getting eliminated by Zaragoza, then finished as runners-up to Dinamo Zagreb in 1967. On both occasions, the team that won the first leg went on to win the tie. Drawing on that experience, Leeds knew the importance of doing well when they hosted Ferencváros, who had won the competition in 1965. They had their work cut out for them, though, in defending Hungarian forward Flórián Albert, the 1967 Ballon d'Or winner.

But, playing before a crowd of 25,268 at Elland Road, the Leeds defense, anchored by the center-back pairing of Jack Charlton and Norman Hunter, kept Albert in check. The day's only goal was scored by Leeds forward Mick Jones, who found the net in the 41st minute.

It turned out to be the only goal of the final, as the two teams played to a scoreless draw in Hungary a month later.