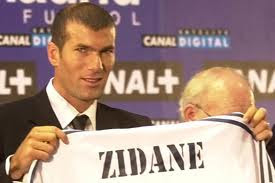 The French midfielder had been immensely successful over the preceding years, winning back-to-back Serie A titles in 1997 and 1998 while finishing as European Cup runners-up both years (the latter one to Real Madrid). He also won the World Cup with France in 1998, which helped him win that year's Ballon d'Or. He won it again in 2000 after helping France become European champions. FIFA also named him their World Player of the Year in 1998 and 2000.

After five seasons with Juventus, Real Madrid lured him away as part of their Galacticos effort, which included the previous world-record signing of Luis Figo from Barcelona for €45M a year earlier. Discussing the record transfer payment, Zidane noted "A while back I said the amount of money was enormous and that I was not worth that much. It is indeed a lot of money. I am fully aware of that and my thoughts on the matter have not changed. A new challenge is at hand. I was really in need of something different. Things came into focus today."

Although the fee carried a lot of expectations, Zidane delivered with an outstanding career in Madrid, winning the Champions League in his first season, along with that season's UEFA Super Cup and Intercontinental Cup. He added a league title in 2003 and a couple of Supercopas de España in 2001 and 2003. He was also named the Ballon d'Or winner and FIFA World Player of the Year again in 2003.

Despite his retirement in 2006, he remains involved with Real Madrid and currently serves as the club's Director of Football.