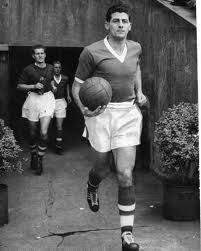 On 21 July 1960, striker Trevor Ford returned to Great Britain after serving a three-year ban related to an illegal payment scheme.

A Welsh international considered by many to be one of the greatest forwards of his era, Ford once set a British transfer record for his position when Sunderland paid £30,000 to sign him from Aston Villa in 1950. He justified the expense by scoring 67 times in 108 league appearances. After three and a half seasons, he moved to Cardiff for a club-record £29,500.

After retiring in 1956, he published his autobiography, I Lead the Attack, in which he claimed to have been involved in an illegal payment scheme while at Sunderland. The Football League pressed him for details and his refusal to provide any information led them to ban him from the league.

He came out of retirement in 1957, but had to go overseas due to the ban. He signed with PSV Eindhoven and stayed there until the Football League lifted the ban in 1960. Upon his return, he signed with Division Three side Newport County, though he made only eight appearances and scored only three goals before ending his league career after the season.