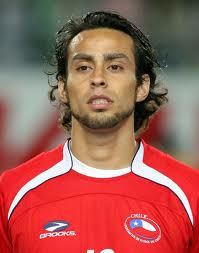 On 11 July 2007, Chile banned six players for twenty games each and barred them from ever captaining the national team.

The Chilean Football Federation issued the bans for conduct that occurred during that year's Copa America, but declined to describe the offenses, saying only that it was a matter of "internal indiscipline." The affected players were midfielder and captain Jorge Valdívia (pictured), striker Reinaldo Navia, and defenders Álvaro Ormeño, Rodrigo Tello, Jorge Vargas, and Pablo Contreras.

The announcement came the day after Chile's elimination from the tournament by Brazil in the quarterfinals, but the underlying incident took place after their final group stage match. As several players were celebrating their progression to the knockout rounds, the six players allegedly sexually harassed two waitresses at the team hotel. After the ban, Ormeño vociferously denied any involvement in the alleged activity.

After serving a ban for ten of the originally-announced twenty matches, five of the six players signed a written  apology and were reinstated to the national team, with Valdívia and Contreras going on to make appearances in the 2010 World Cup (Tello received a call-up, but did not play). The lone holdout was Ormeño, who continued to maintain his innocence.