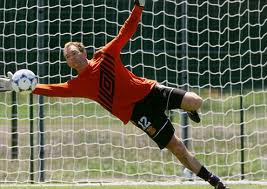 On 24 July 1958, goalkeeper Jim Leighton was born in Johnstone, Scotland. He had a lengthy career that saw him become the oldest person to play for the national team and reach second on Scotland's all-time appearances list.

He started his career with non-league Dalry Thistle, then joined Aberdeen in July 1978, signed by their new manager, Alex Ferguson. He made 438 appearances, winning three league titles, four Scottish Cups, and the European Cup-Winners' Cup, before leaving with Ferguson in 1988 for Manchester United.

After two seasons at United, he fell out of favor with Ferguson and spent a year on loan at Arsenal, then later played for Reading, Dundee, Sheffield United, and Hibernian before returning to Aberdeen in 1997. He played there until his retirement in 2000, becoming the oldest player to appear in the Scottish Premier League at the age of 41 years, 302 days (St. Mirren's Andy Millen broke that record in 2007).

Leighton received his first call-up to the national team in 1982 and manned the posts for Scotland at the 1986, 1990, and 1998 World Cups (the Scots failed to qualify for the 1994 tournament). His final appearance for Scotland set the age record at 40 years, 2 months, and 6 days (though that was later broken in 2010 by David Weir). His 91 caps are the second-most of any Scottish player, just behind Kenny Dalglish (102).
Posted by Brian Seal at 12:01 AM