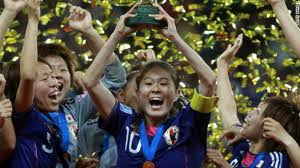 It was the capstone of a remarkable run for Japan, whose history in the competition included one quarterfinal appearance (in 1995) to go with four group-stage exits. But they had put the rest of the world on notice by reaching the semi-finals in the 2008 Olympics before losing to the United States.

They finished second in their World Cup group to England to set up a stunning extra-time won over hosts Germany in the quarterfinals, then beat Sweden 3-1 in the semis to fix their date with two-time champions the United States.

Playing before a crowd of 48,817 at Frankfurt's Commerzbank-Arena, the two teams played to a scoreless stalemate in the first half due in large part to outstanding performances from the two keepers, Ayumi Kaihori and Hope Solo. At the break, US manager Pia Sundhage replaced support striker Lauren Cheney with forward Alex Morgan, who delivered a go-ahead strike in the 69th minute. But Japanese winger Aya Miyama equalized in the 81st minute to send the match into extra time.

There, the Americans again pulled ahead courtesy of a 104th-minute goal from forward Abby Wambach, but Japan again drew level, this time with an amazing strike from midfielder and captain Homare Sawa, who deflected a corner kick into the goal in the 117th minute using the outside of her foot.

In the shootout, Kaihori saved two of the Americans' first three attempts, with the other going over the bar. Solo made a save of her own, so the tally was 2-0 for Japan after three kicks each. Wambach converted the next shot for the US, but central defender Saki Kumagai then beat Solo to capture the trophy.