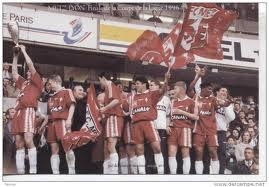 On 6 April 1996, Metz won their second Coupe de la Ligue, beating Lyon on penalties, 0-0 (4-5). It was the first of three consecutive finals to go to a shootout.

Metz won the cup for the first time in 1986, when they defeated Cannes 2-1. Lyon, however, were making their first trip to the final. Despite the presence of some of Ligue 1's top scorers, including Lyon's Florian Maurice and the Metz duo of Robert Pirès and Cyrille Pouget, the teams battled to a scoreless standstill through extra time.

Their struggles continued in the shootout, as Lyon's Stéphane Roche sent the first kick over the bar (and was consoled by Metz keeper Jacques Songo'o), then Metz's Sylvain Kastendeuch did the same (but without the consolation).

They finally found the net with their next kicks, including shots by Maurice, Pirès, and Lyon goalkeeper Pascal Olmeta, to draw level at 4-4. But then, with Lyon's sixth kick, defender Marcelo sent it to his left, where a diving Songo'o met it and pushed it wide. Pouget then converted his attempt to give Metz the victory.