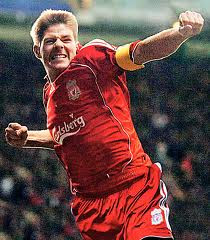 On 13 April 2008, Steven Gerrard made his 300th appearance for Liverpool. And he did it in style, scoring one goal and assisting another in a 3-1 win over Blackburn.

Born on Merseyside in 1980, Gerrard has been with Liverpool since joining them as a youth player in 1987. He became a professional in 1997 and made his first appearance in a 2-0 win over Blackburn in November 1998.

He became a regular starter in the 1999-2000 season, then won his first silverware the following season as the Reds claimed the FA Cup, League Cup, and UEFA Cup. He then became team captain in October 2003.

His 300th appearance came at Anfield, where the midfielder delivered the opening goal in the 60th minute, passing through two defenders and sending the ball through the legs of a third before putting it into the back of the net. He helped double the lead 22 minutes later, providing a cross that was knocked home by striker Fernando Torres. Forward Andriy Voronin added a third in the 90th minute before Rovers got one back in stoppage time to end the day as a 3-1 Liverpool victory.

Gerrard remains with Liverpool and has since pushed his appearance count to 577.