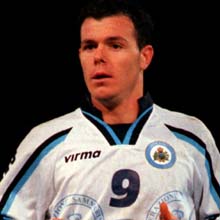 On 28 April 2004, San Marino recorded their first win in 65 attempts, beating Liechtenstein 1-0 in a friendly.

Although founded in 1931, the football federation of San Marino--situated on the northeastern part of the Italian peninsula--did not enter a team into an official FIFA competition until 1990. Their early years were ones of frustration, as the small nation went up to their fourteenth match before avoiding defeat, finally earning a draw  with Turkey in a qualifier for the 1994 World Cup.

A meager crowd of only 700 people turned out at the Stadio Olimpico for the match. But they were rewarded with a goal from San Marino striker Andy Selva (pictured) in the fifth minute. It was his fourth international goal and only the eleventh in the history of the national team. San Marino managed to hold the slender lead until the end, finishing the day as 1-0 winners to taste victory for the first time.

Unfortunately for San Marino, they quickly returned to their previous level of futility, having lost all forty-five subsequent matches for an overall record of 1 win, 3 draws, and 105 losses.
Posted by Brian Seal at 12:01 AM