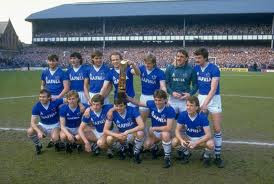 On 25 April 1985, Everton claimed one of their greatest wins, beating Bayern Munich 3-1 at Goodison Park.

Both Everton and Bayern Munich were enjoying strong seasons that would end with both of them winning their leagues. Their match-up came in the European Cup Winners' Cup semifinals, with the two teams playing to a scoreless draw in Munich on 10 April in the first leg.

At Goodison for the return leg, Bayern took the advantage with a 37th-minute goal from striker Dieter Hoeness. Down 0-1 at the break, Everton manager Howard Kendall reportedly pointed out that, in the second half, they were going to be shooting toward the Gwladys Street end, location of the most rabid home supporters, and told his players "Just kick toward Gwladys Street, the fans will suck it into the goal."

It didn't take long. The Toffees equalized in just the 47th minute with a strike from forward Graeme Sharp. Striker Andy Gray then put them ahead in the 73rd minute before winger Trevor Steven completed the comeback and sealed the win with a goal in the 87th minute.

The win sent Everton to the final where they proceeded to beat Rapid Wien 3-1 for their first and only piece of European silverware.