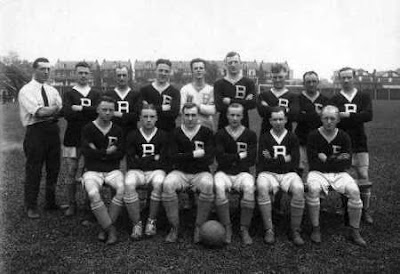 Despite being separated by half a continent, the two teams had developed a healthy rivalry over the previous decade. In 1916, Bethlehem Steel (pictured in a 1921 photo) were the strongest team in the eastern half of the United States, while Ben Millers were the dominant side in the powerful St. Louis soccer world. The teams met for a Christmas Day friendly that year in St. Louis to settle which team was the country's best and played to a 2-2 draw. In a rematch in New York the following year, Bethlehem Steel won 2-0.

It was the last appearance in the Final for either team, but Bethlehem Steel's five wins remain a record (though it is shared with Maccabi Los Angeles, who matched it in 1981).
Posted by Brian Seal at 12:01 AM