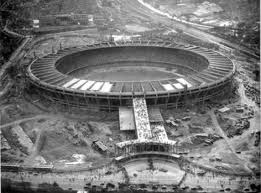 On 16 June 1950, an all-star match inaugurated the new Municipal Stadium in Rio de Janeiro. Now known as the Maracanã, it is one of the most famous football venues in the world.

The stadium was built for the 1950 World Cup with a capacity of just under 200,000, making it was one of the world's largest stadiums at the time. Construction began in 1948 was not fully completed for the opening match--the stadium still lacked toilets and showed signs of ongoing work. Nevertheless, a group of Rio de Janeiro All-Stars defeated a group of São Paulo All-Stars 3-1, with Fluminense midfielder Valdir "Didi" Pereira scoring the first goal for the home side.

The stadium's most famous match, nicknamed the "Maracanazo," came in the 1950 World Cup, as Uruguay upset Brazil to claim the trophy. It was also the place where Pelé scored "O Milésimo," his 1,000th career goal, in 1969.

Since then, it has hosted matches for Rio's four prominent clubs, Vasco da Gama, Botafogo, Flamengo, and Fluminense. In 1966, it was renamed the Estadio Jornálista Mário Filho, after a local journalist who championed the stadium's construction. But it is still known as the Maracanã, after a local river which, in turn, is named after a type of parrot common to the area.

In 2014, the World Cup will return to the Maracanã, which is scheduled to host the Final.
Posted by Brian Seal at 12:01 AM