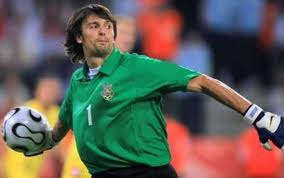 On 26 June 2006, Switzerland set a couple of World Cup records. Unfortunately for them, however, neither of them was one they wanted to set.

The Swiss had surprised most observers by winning their first-round group with a scoreless draw against France and a couple of 2-0 victories over Togo and South Korea. That performance sent them through to the Round of 16, where they met the Ukraine.

Playing before a crowd of 45,000 in Cologne, the two teams were locked in a defensive struggle. The Ukraine's best chance came from Andriy Shevchenko, who sent a header off the bar, while Switzerland's Alexander Frei also hit the woodwork. But nobody managed to find the back of the net through extra time, so the match went to a penalty shootout.

Shevchenko took the first kick, but sent it right into the arms of Swiss keeper Pascal Zuberbuehler. Switzerland's euphoria was short-lived, however, as their first shooter, Marco Streller, did the same. Then, after Ukraine converted their next two kicks, Switzerland proceeded to miss theirs, sending one over the bar and the other right to Ukraine keeper Oleksandr Shovkovskiy (pictured). Ukrainian midfielder Oleh Husyev then scored on the next kick to send the Ukraine through, 0-0 (3-0).

The result earned Switzerland the dubious distinction of becoming the first team to get eliminated from the World Cup without conceding a single goal. They also became the first team in a World Cup to miss all of their kicks in a penalty shootout.