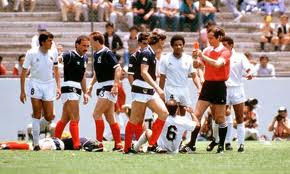 On 13 June 1986, Uruguay defender José Batista set a World Cup record. Unfortunately, it was a record for fastest ejection, coming after only 56 seconds.

That day, Uruguay met Scotland in the last group stage match for both teams, with a place in the knockout rounds at stake. Uruguay needed only a draw to advance, while Scotland had to win.

The Scots got a lucky break in the first minute, as Batista received a straight red for a rash challenge on Gordon Strachan. Strachan had just received a throw-in when Batista came barreling in behind him, collapsing him like a rag doll. The ensuing red card earned Batista a spot in the Guinness Book of World Records for fastest ejection in a World Cup match and also helped him claim the 14th spot in a 2007 Times list of football's 50 greatest hard men. Strachan, meanwhile, was able to continue playing after treatment.

The challenge set the tone for the match, which saw five yellow cards (three for Uruguay, two for Scotland) and no goals. It ended scoreless, which sent Uruguay through to the Round of 16, where they lost to Argentina.

Batista continued to play for Uruguay until 1993, making a total of 14 appearances.