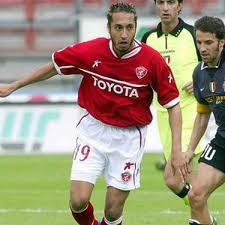 On 29 June 2003, Perugia announced their new signing, a forward who also happened to be the son of Libyan leader Muammar Gaddafi.

Saadi Gaddafi started his career in Libya with Al-Ahly Tripoli in 2000, but moved across town in 2001 to Al-Ittihad. That year, he was named Libyan striker of the year and went on to score 20 goals for Al-Ittihad in 74 league appearances.

In mid-June 2003, Gaddafi started training with Perugia. Then, on the 29th, the club announced that they had signed him to a two-year contract. In order to join them, however, he first had resign from the board at Juventus and relinquish his shares in the Turin club. The move immediately drew criticism as a publicity stunt, but Perugia president Luciano Gaucci claimed the move was made for football reasons, saying "Above all, I believe in him as a person and in his ability as a player."

His ability never really manifested, however, and Gaddafi made only one appearance for Perugia in two seasons. And that appearance came after he served a three-month ban for testing positive for steroids. In 2005, he moved to Udinese for a season, but again made only a single appearance before moving on to Sampdoria (where he made no appearances), then retiring in 2007.
Posted by Brian Seal at 12:01 AM