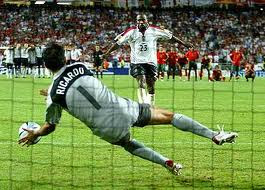 On 24 June 2004, goalkeeper Ricardo Pereira was the hero of the day, first saving a kick from England's Darius Vassell in a penalty shootout, then converting the next kick to send Portugal through to the Euro 2004 semifinals.

Playing before a crowd of 65,000 at Lisbon's Estádio da Luz, England led for most of the match thanks to a 3rd-minute goal from striker Michael Owen. But in the 83rd minute, substitute striker Hélder Postiga equalized for the hosts to send the match into extra time. There, the two teams traded goals from Rui Costa (110') and Frank Lampard (115') to force a decision by penalty shootout.

The first kick was taken by England's David Beckham, who, in a shocking miss, sent the ball well over the bar (later reports claimed he had slipped a bit on the sandy pitch). But England were handed a reprieve five kicks later as Rui Costa also drove his shot over. After six kicks each, the teams were level at 5-5. Darius Vassell then stepped up to the spot for England, having come on as a first-half substitute for an injured Wayne Rooney.

Vassell fired the ball to Ricardo's left, but the keeper--who had inexplicably removed his gloves before the kick--guessed correctly and pushed it away. He then stepped up to take his own attempt and confidently blasted it to the right of England keeper David James and into the bottom corner. Portugal won 2-2 (6-5) and advanced, making it all the way to the Final where they lost to Greece.

Ricardo and Portugal beat England again in a penalty shootout during the quarterfinals of the 2006 World Cup, winning 0-0 (1-3).
Posted by Brian Seal at 12:01 AM