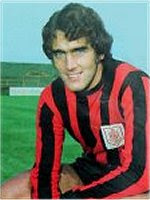 On 20 November 1971, Third Division side Bournemouth thoroughly thrashed the Southern League's Margate by the score of 11-0 in the First Round of the 1971-72 FA Cup. Bournemouth's hero that day was 24-year old Scottish forward Ted "SuperMac" MacDougall (pictured), who scored nine of the Cherries' eleven goals.

MacDougall had joined Bournemouth in the summer of 1969 (when the club was still known as "Bournemouth & Boscombe Athletic") after being acquired from York City for £10,000. He scored 21 league goals for the Cherries that season, but they were nonetheless relegated to Division Four. Under new manager John Bond, they were promoted at the first opportunity and were enjoying their return to the Third Division when they met Margate in the FA Cup.
MacDougall scored five goals in the first half, prompting the Margate manager to ask Bond jokingly to substitute the forward in the second half. MacDougall went on to score four more after the break.
The Cherries advanced to the Third Round where they were eliminated 1-0 by Walsall. MacDougall moved to Manchester United in September 1972 for a transfer fee of £200,000, but never settled. He played for a number of other clubs, including a second stint at Bournemouth, before retiring in 1980.
His 9 goals still hold the FA Cup record for the most scored by a player in a single game.
Posted by Brian Seal at 12:01 AM